Over the weekend of the 4th-6th, Mrs. Bell’s Discover club went to Washington D.C. for a jam-packed weekend. Leaving at 8:30 in the morning on a Thursday, the trip goers had a long day (the longest day) and a four hour bus ride to go. As soon as the trip arrived at the Embassy Suites in Alexandria, Virginia, everyone was already on the metro to the next place. 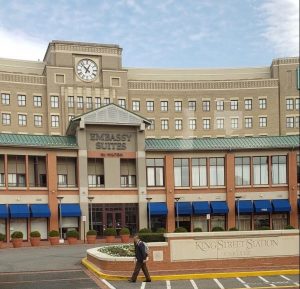 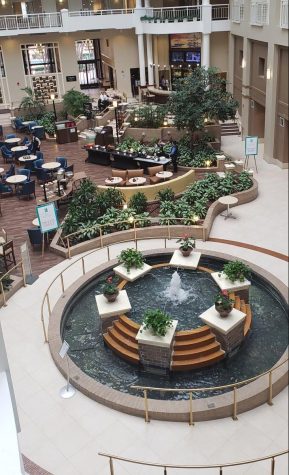 The very first stop was Arlington Cemetery, which included a long hike to watch the Changing of the Guard and the Arlington House. In the Changing of the Guard, a soldier who belongs to a specific unit, marches and/or turns for exact 21 steps or seconds for half an hour or an hour straight. Next was a short hike to Arlington House, which was closed for construction, but from there, you could see the Pentagon in the far distance.

At Arlington Cemetery, private funerals for fallen soldiers were taking place, as they were being buried. In the distance, one could hear gunshots for the respective soldier. As you leave the Cemetery, golden letters remind you,”Rest on embalmed and sainted dead dear as the blood ye cave no impious footsteps here shall tread the herbace of your grave”.

The group returned to the hotel, checked in, and left for The Wharf. Speed walking for ten minutes down King-Street, we caught the Water Taxi which took us on a long, relaxing ride across the Potomac River (and Virginia to D.C.) to the Wharf. From there, all the students went to whatever restaurant they wanted and walked all across the Wharf, which

is D.C.’s equivalent to the Seaside Boardwalk.

After dinner at The Wharf, our night tour of the National Mall began. Walking an approximate 10-13 miles, we walked around the famous tidal basin, passing by the Jefferson, Franklin Delano Roosevelt, and MLK memorials.

Another significant part of the trip were the Cherry Blossoms, which were in bloom, and only in full bloom, during the weekend in which we went. These blossoms, a gift from Japan in 1912, looked just as good at night as well as in the day. The crew passed the Washington Monument, then walked to the metro, and went home at almost midnight, concluding the first day in D.C.  As we started the next, the groups split based on what they wanted to do in the national mall, which would dictate the rest of their day for the most part. One group decided to go to the Holocaust Museum, and the other to Air and Space. From there, we met at L’Enfant Plaza very quickly. The other group moved on to experience a crazy Big Bus ride, while the next group took the metro to Dupont Circle, a trendy downtown area to have lunch. After meeting up once again, we took the metro and walked to The Willard, a historically famous and upscale hotel to catch the big bus tour of the National Mall once again. 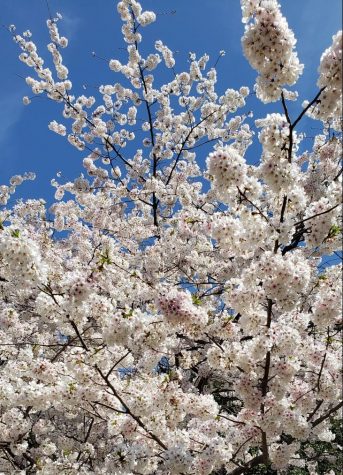 The last day was a complete change from the previous too. On Saturday, it was jam-packed with tourists from many different places around the world, all to see the cherry blossoms. They were in full bloom on that day, and the run around the tidal basin as well as Petalpalooza, were all taking place to celebrate the once a year event.  After walking around the tidal basin and re-visiting the F.D.R and M.L.K Jr. Memorial, and for the first the first time, visited the Korean and Vietnam War Memorials. Both were somber, as there were mourning individuals and veterans visiting the memorial. Many laid down flowers and arrangements out of respect. After this, we visited our second to last memorial, which was the mecca for tourists. Many different people from different parts of the world were all gathered to view and take pictures of the Lincoln Memorial.

The iconic Honest Abe sat huge in comparison to everyone else, and one could not help but stare in awe, and take a picture of course.  There are two murals inside, the Gettysburg Address and his second inaugural speech. While one looks at Abraham Lincoln, they can turn and look at the Washington Monument and in the far distance, the Capitol Building, which are equidistant from each other and all serve as markers for tourists. 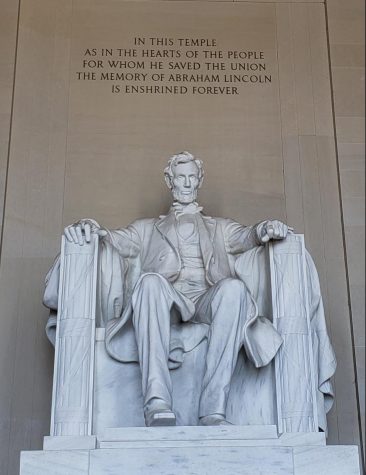 The very last memorial was the World War II memorial. What made this memorial more special than any other was the fact that veterans in their late years were there, and as they entered and exited, people stood on the sides and applauded for their service and contributions. Since this the WWII memorial is one of the most recent, there is an initiative to have all veterans visit before they can no longer, so it was especially important for those veterans. The memorial itself was comprised of statues of each state and territory of the United States, two pillars labeled Atlantic and Pacific, and a beautiful fountain in the center.

After that, the two groups split once again, met up to decide where everyone’s last journey was in D.C., then split again. The first group went on a half-hour walk to Captain Cookie and the Milkman, an infamous bakery known for their cookies and ice cream on the outskirts of the Dupont Circle near the George Washington University. The second group went to the White House visitors center to buy merch and memorabilia, staying in the National Mall. Everyone separately arrived back to the hotel, leaving for home in a rush and sleeping on the bus ride home, until after hitting a rest stop, where all the kids sang Christmas songs and top hits in order to stay awake. Once the trip was over, everyone was dead-beat tired, but appreciated the trip in hindsight, as many students can say this was the trip of their high school career.